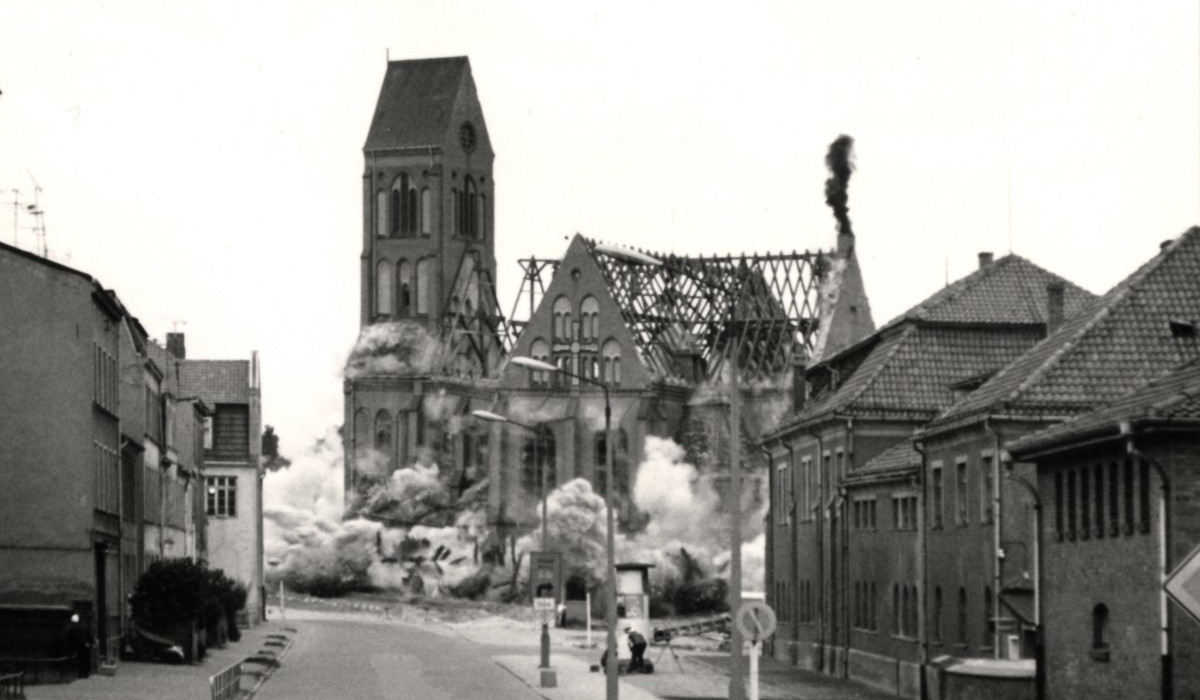 The demolition of the Christ Church 50 years ago 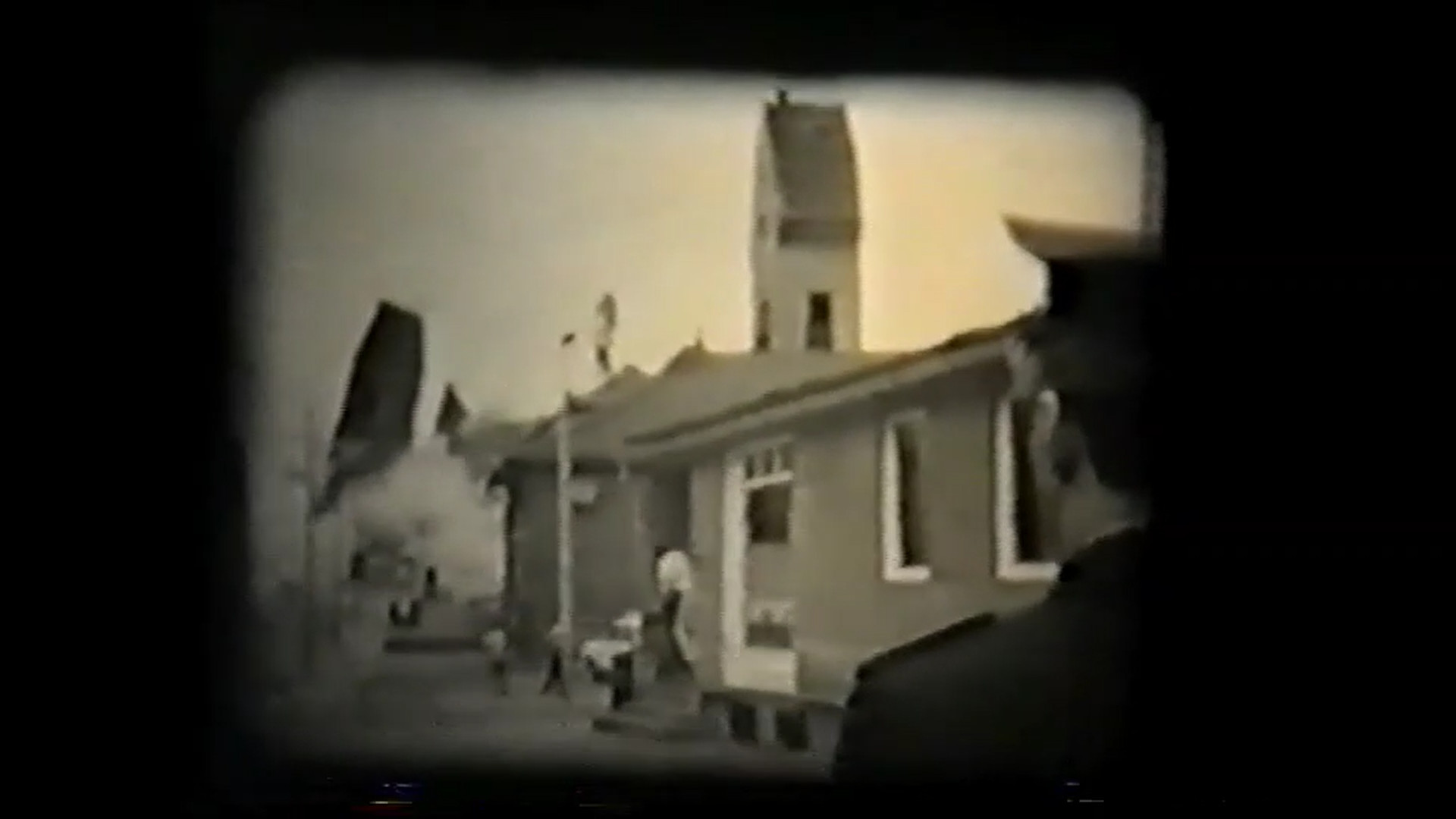 The video shows how the roof was covered shortly before the day of blasting - building materials were in short supply in the GDR. Everyday situations …

The video shows how the roof was covered shortly before the day of blasting - building materials were in short supply in the GDR. Everyday situations such as the traffic on Schröderplatz in front of the Christ Church, which can be seen in the lively city center of Rostock, are also noteworthy. Buses, trams, tabis and trucks are regulated by a traffic policeman. People cross the streets.

Then pictures from the day of the demolition can be seen. People flock towards the church. The People's Police cordoned off the area. Then the demolition. The church is collapsing. A cloud of dust is forming and it must have been very loud, because some people seem to have been surprised by the event despite the warning and are coming out of their houses.

Then you can see pictures of how the barriers were lifted and people looking at the rubble of the destroyed church.

After the fall of the Wall in 1989, the images were handed in to the parish office of the Christ Church. The man who did it wanted to remain anonymous. It is also unknown who took the pictures. 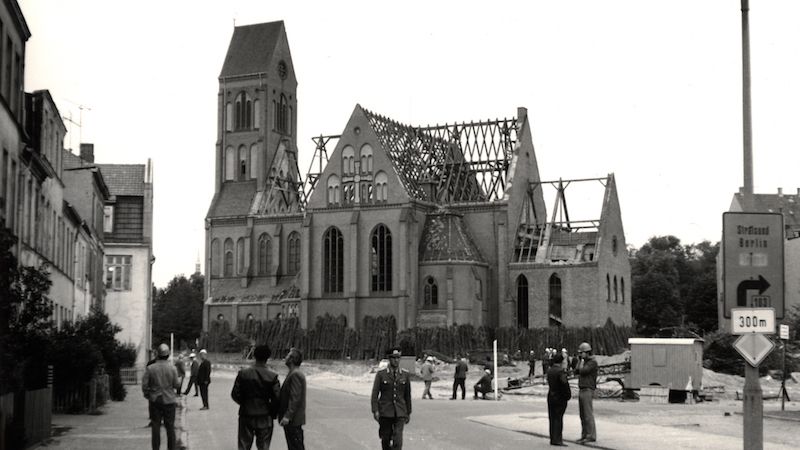 "On August 12, 1971, the Christ Church in Rostock was blown up. As a 12-year-old I was stunned with my parents on the roof at Friedhofsweg 11, the house in which we lived at the time, and we watched this outrage from there. One day after that, I collected a stone from the blown as a memento and put it in my desk drawer.
Three years ago, brother-in-law Uwe von Holzfälle brought me a piece of oak whose structure was too good for him to burn. Immediately my association was with the stone in my desk. Now I have freed the oak from the wormed sapwood and put both together. "(Wieland Eschenburg)

"But the days of the community center on Schröderplatz were numbered when I came to Rostock. The whole drama of this time can be read in the book 'Aus den Augen - Aus dem Sinn' by Georg M. Diederich. The congregation and all of us were deeply shaken when the church was blown up on August 12, 1971. The parish hall and the rectory had already been removed "(Father Josef Ullrich SJ, chaplain 1970–72)

"Finally there was a detonation, and in a few seconds the large building that was my" home "collapsed in a huge cloud of dust. I hardly dared breathe until the warning sound of the bugle could be heard. Then I asked whether I was just dreaming. I hadn't yet understood that the church was just a heap of rubble ... Then I got as close as possible to the rubble. Nobody paid any attention to me as I took out my small camera and hurriedly some Male pressed the shutter button. By now, knowing that I had done something forbidden, I hid the device under my jacket, hurried to the rubble, hastily pulled out a whole brick and quickly ran home. I decided to use this stone as a souvenir to keep in my church for the rest of my life. " (Sigrid Englers, from: Georg M. Diederich: Aus den Augen - Aus dem Sinn) 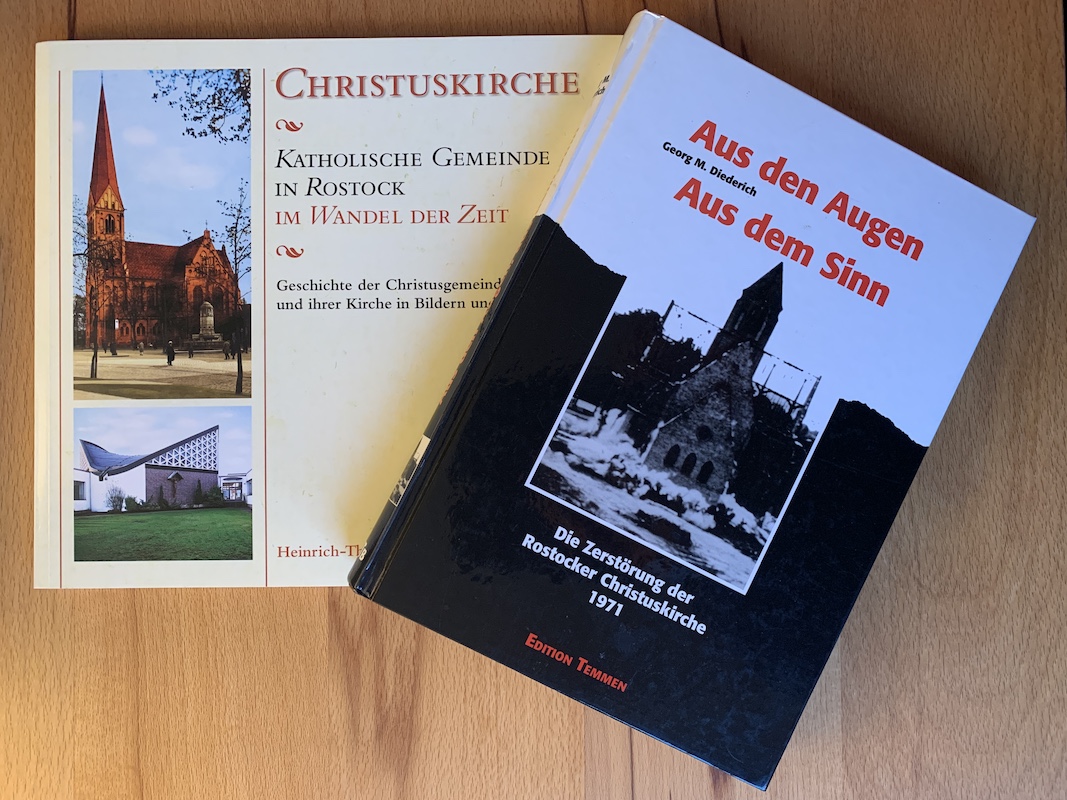 The history of the Catholics in Rostock can be …

The history of the Catholics in Rostock can be read in this book: Christuskirche - Katholische Gemeinde in Rostock im Wandel der Zeit – still available here. 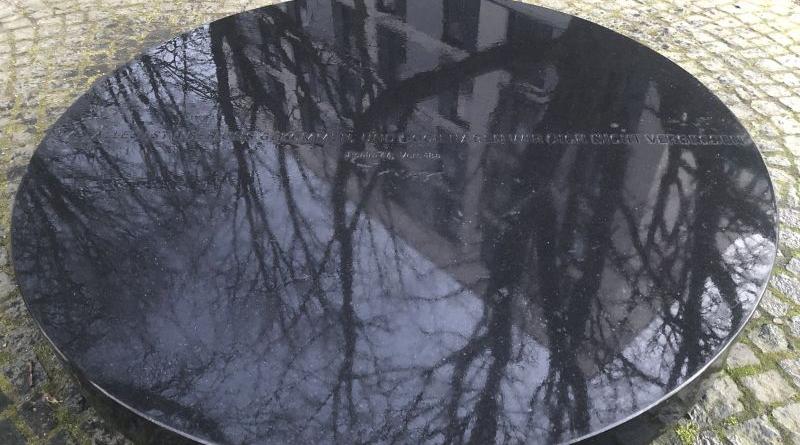 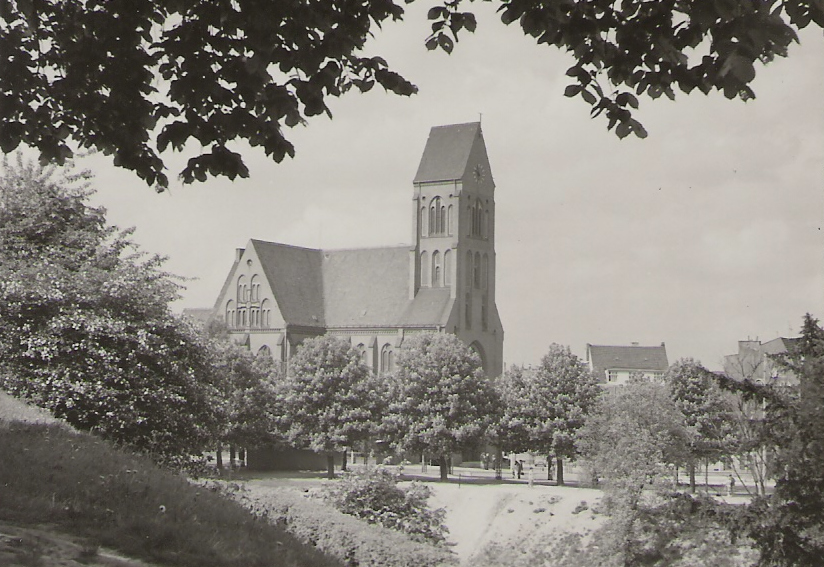 In 1909 the first Christ Church was consecrated on Schröderplatz. The largest Catholic church in Mecklenburg was a magnificent neo-Gothic clinker …

In 1909 the first Christ Church was consecrated on Schröderplatz. The largest Catholic church in Mecklenburg was a magnificent neo-Gothic clinker brick building, designed by the secret building officer Ludwig Möckel. 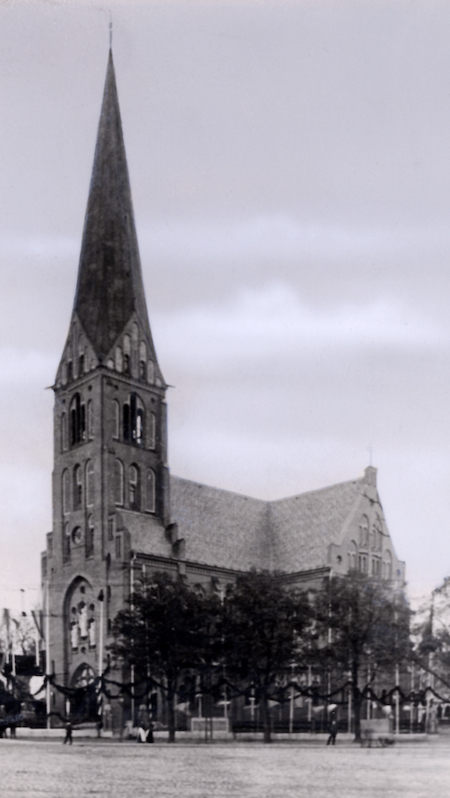 The 42 m long three-aisled structure with a cross nave had a 68 m high tower. The Christ Church thus belonged to the famous city skyline of Rostock in the prewar period. 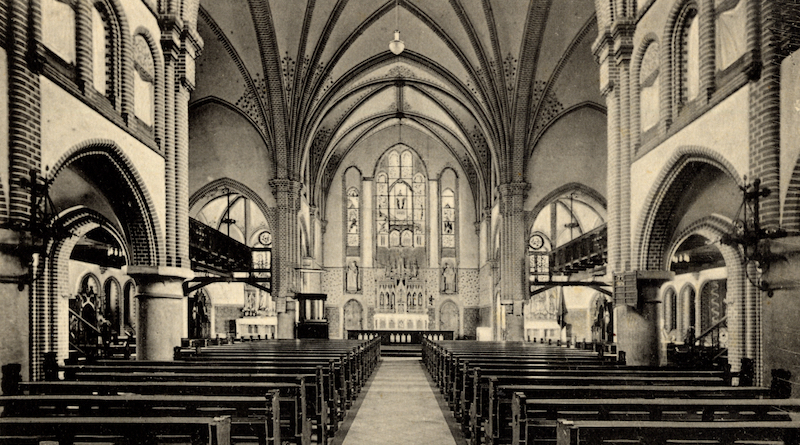 Almost the entire city disappeared during World War II. The Christ Church was also badly damaged. After 1945, the reconstruction began with great effort. 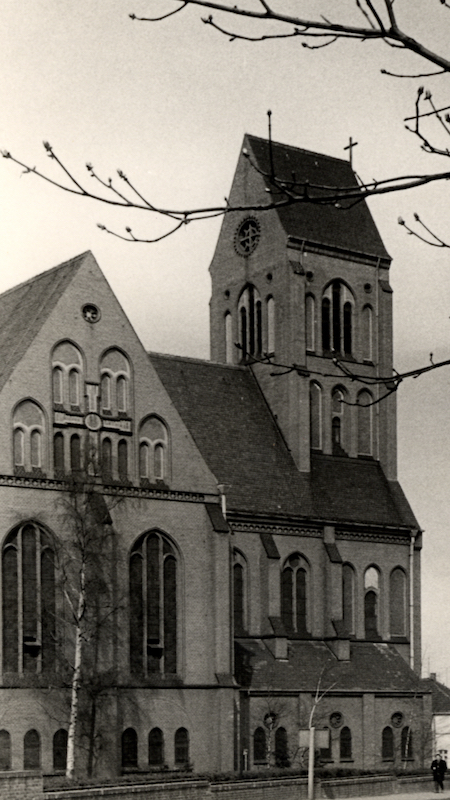 The church was rebuilt in a simplified form. The gable roof on the tower stump, reminiscent of praying hands, was characteristic of this time.

The last service in the old Christ Church on June 10, 1971 can be listened to here. 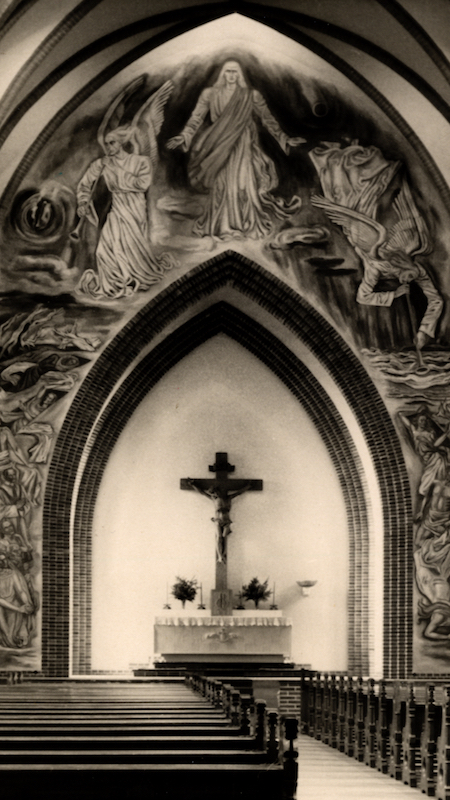 The church building fell victim to the excessive urban planning for a socialist center. Despite massive protests, the church was blown up as an act of political arbitrariness on August 12, 1971, two months after the consecration of the new Christ Church. Its former location served as a parking lot until the beginning of the 2010s.

After the site was rebuilt with a hotel, the outlines of the church were embedded in the pavement and the hotel lobby in 2014. In addition, since 2009 a memorial commemorates the old Christ Church. 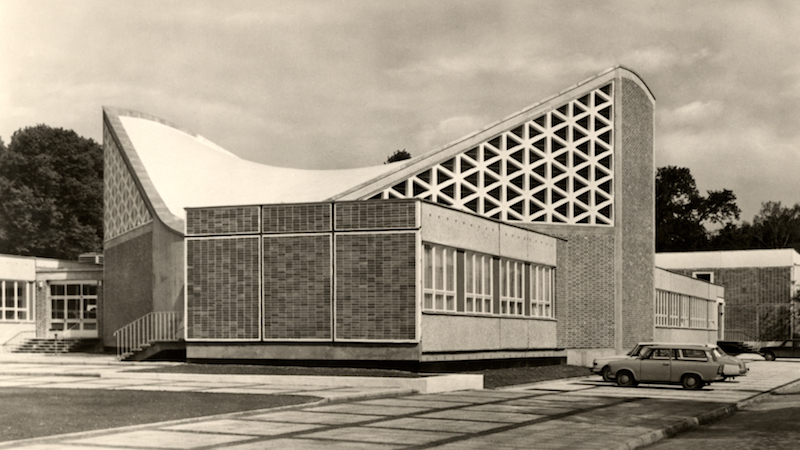 The new Christ Church on the edge of the Lindenpark is a modern church building with an attached community center. The building ensemble was built from 1970 and inaugurated on June 12, 1971. The actual church has a square, rounded floor plan and is centrally aligned in the diagonals. The self-supporting roof is designed as a hyperbolic shell construction made of reinforced concrete. The interior design takes up the specifications of Vatican II. The slightly raised altar island is surrounded in a semicircle by the benches that offer space for 400 people. The spacious community rooms allow extensive community life.